Government harassment of journalists has become a trend in Latin American countries, with leaders often using the strength of state institutions, such as the judiciary and police, to discredit and even silence the press. There is also the creation and financing of official outlets led by government allies in which the only narrative is the one that favors power.

This was the subject of one of the sessions of the 14th Ibero-American Colloquium on Digital Journalism, which brought together journalists from Brazil, Venezuela, El Salvador, Nicaragua and Mexico. All these countries have leaders who make open conflict with the press a characteristic of the exercise of power, which can take the form of million-dollar fines to even accusations of terrorism.

In El Salvador, the persecution occurs, on the one hand, against journalists and outlets that fulfill their function of critically informing society and, on the other hand, through the emergence of new media platforms, television channels and newspapers that adhere to official discourse. President Nayib Bukele himself, who took power two years ago, commands the persecution and recognizes bullying against journalists, according to Carlos Dada, co-founder and director of the digital media outlet El Faro.

"And now he has taken to the habit of doing it on Saturday nights, which he himself calls Bullying Saturdays. (...) All these efforts are the imposition of a unique narrative, of course of the official narrative, in which there can be no other version of the country and no dissident voice or criticism," Dada said during the colloquium.

In the specific case of El Faro, which was the first digital native media outlet in Latin America, there is a financial audit promoted by the Ministry of Finance and accusations of alleged money laundering.

What happens to the journalists of El Salvador, two years under Bukele, is a process already known by journalists in Nicaragua, where Daniel Ortega has occupied the presidency since 2007. In one of the most emblematic attacks of the regime against the Nicaraguan press, at the end of last year, the government expropriated the facilities where newspaper Confidencial and the portal 100% Noticias operated. The two newsrooms had been occupied by police since 2018.

“This situation provoked, on the one hand, the resistance of the press and, on the other hand, the exile of many journalists, including myself. I was to be exiled in Costa Rica for 11 months, I returned to do journalism in Nicaragua without any guarantee. There are many other colleagues who are still in exile,” said Carlos Fernando Chamorro, founder and director of Confidencial.

Systematic judicial and financial harassment of communication outlets led to the closure of several Nicaraguan publications, according to Chamorro, shutting out voices critical of the Ortega government. However, he pointed out that the situation is not yet as serious as in other Latin American countries such as Venezuela and Cuba, where even Internet access is limited. With this, many of the journalists from outlets that closed remain active on social networks.

"Internet access and social networks have been key to circumventing censorship and to maintaining communication with audiences," Chamorro said. "It is not comparable with the audience that we had before on open television and the cable system, but the fundamental thing is that there is a vivid flame of the independent press that remains lit in Nicaragua."

The flame is also lit in Venezuela, despite the deterioration of press freedom in progress since 1999, first with Hugo Chávez and then with Nicolás Maduro. In more than 20 years, this has resulted in the closing of TV channels and newspapers, and also in the emergence of outlets aligned with the government.

“The blockings have been converted today into something more dangerous, which is the creation of what I call official paramedia outlets. They are media that arise from nothing, that don’t have owners who show their faces, and are dedicated to the information of disinformation to discredit the work of journalists,” said Luz Mely Reyes, co-founder and director of Efecto Cocuyo. 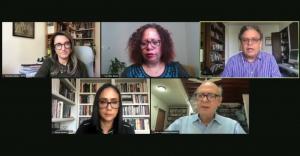 Even so, the Venezuelan regime continues to invest against journalistic outlets that have been able to remain independent. This is the case of newspaper El Nacional, which was sentenced to pay a fine of USD $13 million to Diosdado Cabello, number two of the regime, for a report that showed his supposed connections with organized crime.

"This was done with the express intention that El Nacional could not have a print version again, because it had begun [since 2018] to be published only as a digital media outlet,” said Reyes, who also cited persecution against Roberto Deniz, from the media outlet Armando.info “for investigating associates of the government for a corruption plot.”

In Mexico, President Andrés Manuel López Obrador is another leader in Latin America that treats critical journalists as political opponents and even enemies, according to Adela Navarro, general director of newspaper Zeta.

"The threats of drug trafficking and organized crime have not ended and the harassment by local municipal governments has not ended, but now we add this climate of official animosity from the presidency of the Republic," Navarro said. "(This) puts journalists and the media in a vulnerable position, puts the lives of journalists in Mexico at risk."

The country is one of the most dangerous for the practice of journalism in the world, according to the NGO Reporters without Borders (RSF). The RSF ranking was also mentioned by Brazilian journalist Patrícia Campos Mello, a reporter and columnist for Folha de S.Paulo, as Brazil was downgraded to the second worst level in the ranking in terms of press freedom. She was the victim of direct attacks from President Jair Bolsonaro and his children, and won two lawsuits that she filed against politicians.

"And then there is even more worrying [when President Bolsonaro] urging entrepreneurs to stop advertising in outlets that are critical to targeting ads only to outlets that are considered ‘patriotic,’” Mello said. “How many things do we have in common between the countries of the region. As if [authoritarian politicians followed] a manual. It is something that they share and get inspired by each other.”

To see the mini-biographies of the speakers, click here.

You can watch the video of the entire Colloquium in Spanish and Portuguese. The annual meeting, traditionally held after the International Symposium on Online Journalism (ISOJ), is organized by the Knight Center for Journalism in the Americas with the support of the Google News Initiative.