The global ranking of press freedom by the NGO Reporters Without Borders (RSF, for its acronym in French) confirmed a perceived trend in Latin America: a general worsening of conditions for the exercise of journalism on the continent. Of the 24 countries in the region analyzed, 19 lost points in the RSF survey.

Among the negative highlights is Nicaragua. The country had the largest nominal loss of points among Latin American neighbors, according to the RSF criteria, and fell four positions in the global ranking. Nicaragua now occupies the 121st position, out of a total 180 countries. In the country presided over by Daniel Ortega since 2007, it is common to see journalists arrested, beaten and exiled.

Pressure against the Nicaraguan press increased with the approval of the new Gag Law last year, which punishes those who divulge false news with up to eight years in prison. For independent journalists, the legislation legalizes repression against the profession.

“With the state of police militarization, the legalization of repression and censorship against journalists and the media, the situation becomes more complex in the electoral context that is supposed to be organized for November 2021,” journalist Ileana Lacayo, member of the executive committee of the Independent Journalists and Communicators of Nicaragua (PCIN), told LatAm Journalism Review (LJR).

In 2020, PCIN registered 1,678 attacks against press freedom and access to information in Nicaragua. “Independent journalism has resisted the repression and brutal censorship strategies of the Ortega government for more than a decade. We appeal to the solidarity and collaboration of journalists from around the world to denounce what is happening in Nicaragua against the independent press and dissidents,” Lacayo said.

Also in Central America, El Salvador experienced a sharp drop in levels of press freedom and lost eight positions in the RSF ranking and ranks 82nd. It is the largest fall in the region and the third largest in the world. Since the inauguration of President Nayib Bukele, in power since August 2019, attacks on journalists have become a matter for concern Harassment against the press is led by public authorities.

Another negative highlight in the ranking is Argentina, which fell five places and is in 69th place. The situation in the country is considered “sensitive,” according to the RSF. Contributing to this is a “surge in abusive lawsuits usually by politicians and officials,” according to RSF.

One of the emblematic cases is that of Argentine journalist Daniel Santoro, who was prosecuted for extortion, coercion and espionage in a case where one of his sources was investigated for these crimes. Santoro, editor of Clarín, had the case revoked in December 2020, after a legal battle that lasted more than a year.

Since the RSF report was released, it has been reported that Santoro will be tried for another alleged extortion attempt.

“Along the same lines, a judge requested the recording of security cameras that allegedly captured an encounter between a journalist and his sources, ignoring the constitutionally protected professional secrecy. This disregard of the journalistic role and of the journalist's relationship with his sources is present in the implicit accusations in the discourse on lawfare, thesis that raises a collusion between sectors of politics, justice and the press, which was in the mouth of the president, the vice president and references from the toughest sectors of the ruling coalition,” Daniel Dessein, president of the Argentine Association of Journalistic Entities (Adepa), told LJR.

There were also significant drops in the RSF ranking for Haiti, Colombia and Brazil. Each fell four positions. In the case of Brazil, which had already dropped two positions in the previous ranking, the country entered the “red” zone of the RSF classification, which indicates countries where the situation of press freedom is “difficult.” It is the second worst ranking level from the organization.

“We have been following unprecedented cases of violation of press freedom by ordinary citizens, such as assaults, virtual harassment, threats and even an attempt to set fire to a newsroom in the interior of São Paulo. We attribute these phenomena to President Jair Bolsonaro's stigmatizing speech against the press, who, in a typical fascist strategy, tries to paint journalists as enemies of the country,” Marcelo Träsel, president of the Brazilian Association of Investigative Journalism (Abraji), told LJR.

Another fact of concern in Brazil, according to Träsel, is the mobilization of state agents against the press and other critical voices in society, behind the National Security Law. “Even with Bolsonaro's possible defeat in 2022, it is possible that the militancy of fascist tendencies that today supports the president will find a new object of worship and continue to persecute journalists and violate press freedom. (…) In the medium and long term, it is necessary to identify and submit to the Judiciary those responsible for crimes against journalists, who have historically enjoyed impunity in Brazil,” Träsel said. 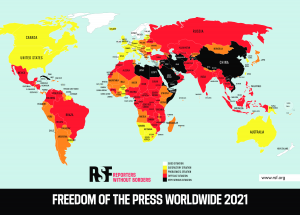 RSF emphasizes in its annual report that “the pandemic has fuelled censorship in Latin America and reporters have had major problems finding out how the region’s governments have handled the public health crisis.” According to RSF, “These constraints have been reflected in a spectacular worsening in the indicator that measures how hard it is for journalists to access state-held information.”

This is the case of countries like Brazil and Venezuela, which omit consolidated data on COVID-19 cases and deaths. In the case of Brazil, data from state governments are compiled and disseminated by a consortium of media outlets.

Independent coverage of the pandemic is also the target of persecution. In Argentina, the municipality of Quilmes filed a criminal complaint against a journalist who wrote about alleged improper packaging of vaccines against COVID-19. In Guatemala, a journalist received death threats after sharing his personal experience after contracting the disease.

“Abuses linked to excesses in the application of health protocols such as those recorded in the province of Formosa [Argentina] that affected the possibility of carrying out journalistic coverage. Rejection of the crossing of borders to journalists, smear campaigns against media that reflected human rights violations in isolation centers, arrest and violence by police forces, aggressive discourse from leaders, etc.,” Dessein said.

Press professionals at the forefront of pandemic coverage also suffer from layoffs and poor working conditions and risk of contamination. Latin America records more than one journalist's death per day due to COVID-19.

Despite the general worsening of press freedom indicators in the region and the majority of countries framed in far from ideal situations, four countries stand out in the top 20 of the global ranking: Uruguay (19th), Uruguay (18th), Jamaica (7th) and Costa Rica (5th).

Costa Rica draws positive attention for having climbed two positions this year and having only the Nordic countries that lead the RSF ranking ahead of it: Norway, Finland, Sweden and Denmark. The country is an outlier among its neighbors in Central America, where the situation of journalists is much more difficult. Costa Rica also surpasses the United States, which is only 44th in the ranking.

On the other side, Cuba remains in the danger zone, at position 171 of a total of 180 countries. Honduras, Venezuela, Mexico and Colombia complete the last five positions among Latin American countries, where journalists are also victims of organized crime, often paying the price of acting independently with their own lives.