The increase in the number of people who avoid journalistic content is a global trend and it’s even more pronounced in Latin American countries.

This is what the Reuters Institute's Digital News Report 2022, published this Wed., June 15, shows.

The reasons for disliking the news are diverse: 43% complain about repetitiveness, especially in coverage of politics and the COVID-19 pandemic. 29% say they are worn out by the news, while another 29% do not trust the news.

"The data suggest some frustration with politics and sort of a polarization in a number of countries, especially Argentina, Brazil, and Mexico. That's often tied up with these issues of low trust, and people see things on the news that they don't agree with, because they feel very strongly on one side or on the other side of these arguments," Digital News Report author Nic Newman told Latam Journalism Review (LJR). 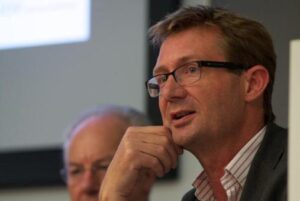 Nic Newman, Reuters Institute: 'The data indicate a frustration with politics and a kind of polarization in a number of countries, particularly in Argentina, Brazil and Mexico.' Credit: Courtesy

About a third (36%) say the news makes their mood worse. Difficulty understanding is cited by 8% of respondents for turning away from the news. This is even more true among the under-35 crowd. "People are looking for a kind of escapism, and in digital, there's always something more entertaining to do," Newman said.

The report also shows an overall decline in trust in the news, after a slight improvement in the previous year. On a global average, 42% of respondents trust the news.

In Latin America, Brazil is the only country with an above average result: 48%. The Argentineans have the lowest trust in the media: 35%. The other countries surveyed were also below the global average in terms of trust: Peru (41%), Chile (38%), Colombia (37%), and Mexico (37%).

According to Newman, it is necessary to better filter the content that reaches the public, because many feel "bombarded" by news they didn't want to have access to. "There was always that promise with digital that we were going to be able to personalize the news and bring things that were relevant. But it hasn't really happened, personalization doesn't really work yet in an effective way. This is one of the challenges that we're gonna need to overcome over the next 10 or 15 years,” he said.

The Reuters Institute Digital News Report also provides data on how much attention the public pays to news organization brands or individual journalists. 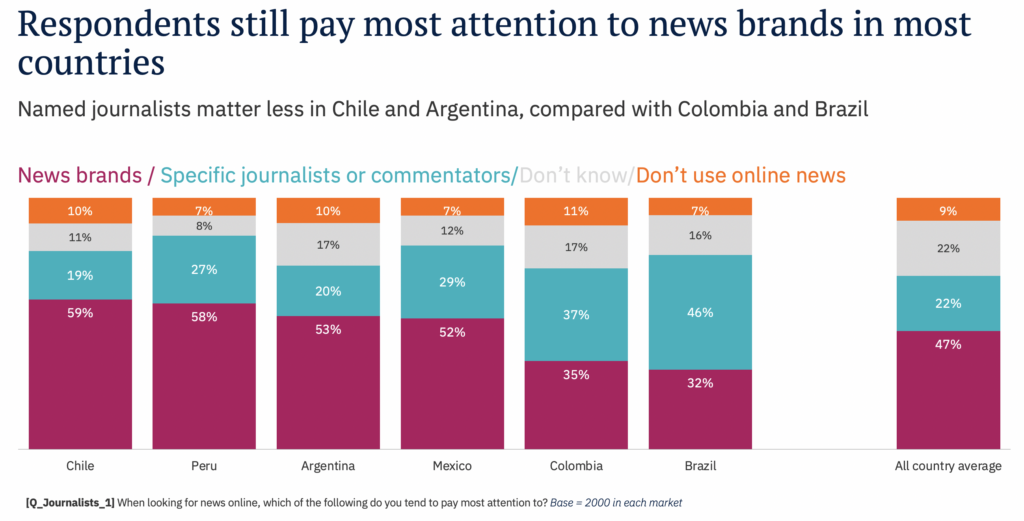 Respondents still pay most attention to news brands in most countries. Name recognition for journalists matters less in Chile and Argentina, compared with Colombia and Brazil. (Source: Reuters Institute)

Worldwide, respondents said they pay more attention to news brands (47%) than to specific journalists (22%). In Latin America, this is also the case in Argentina, Chile, Peru, and Mexico.

In Colombia and Brazil, on the other hand, the public said they pay more attention to specific journalists than to news organizations. According to Newman, this shift reflects the additional possibilities that have arisen for journalists to develop their own direct relationships with audiences and their own businesses.

"That's a specific challenge [for brands], particularly if you're trying to get those strong connections and get people to take up subscription models. That's gonna be harder in a market where those brand connections are weaker,” he said.

A Spanish-language version of the report will be published on June 28 thanks to the Gabo Foundation. A special launch event for Latin America is happening that same day and features Rasmus Nielsen, director of the Reuters Institute; Eduardo Suárez, head of editorial at the Reuters Institute; Luz Mely Reyes, editor and founder of Venezuela's Efecto Cocuyo; and Patrícia Campos Mello, columnist at Brazil's Folha de S.Paulo. Registration for that event is open now.