Online news has become the main source of news in Latin America and most of the world. As the internet and the communications platforms within it diversify, so are the ways that consumers access that content. 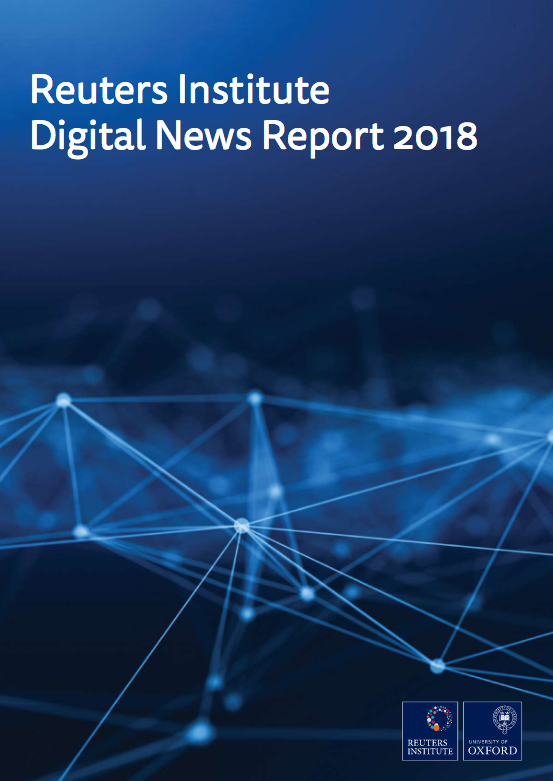 Online news has become the main source of news in Latin America and most of the world. As the internet and the communications platforms within it diversify, so are the ways that consumers access that content.

Seventy-one percent of respondents are accessing news from smartphones in Argentina, 81 percent in Chile and 74 percent in Mexico. In Brazil, the percentage of smartphone users (72%)  is tied with those getting news from their computers, but the latter number is in decline.

Argentina, Brazil, Chile and Mexico are the four Latin American countries out of a total 37 surveyed in the Reuters Institute Digital News Report 2018. About 2,000 people were surveyed in each country in the region. Additionally, the Institute conducted focus groups in Brazil in which it spoke with Facebook and WhatsApp users about news consumption on the social media platforms, according to David A. L. Levy, RISJ director.

In each Latin American country, a majority of respondents are using Facebook as the top social media and messaging platform for news. However, that percentage also fell in each country compared with the previous year. In all countries but Mexico, WhatsApp ranked second (YouTube was second in Mexico and WhatsApp was third). 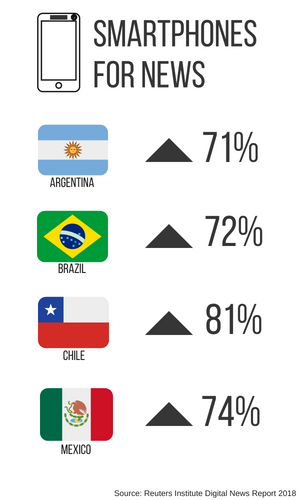 Yet, taking into account all countries globally, the report found that media companies are moving away from distributed content on social media and aggregators in favor of higher quality content and reader payment.

“And yet these changes are fragile, unevenly distributed and come on top of many years of digital disruption, which has undermined confidence of both publishers and consumers,” the report stated.

In terms of trust in news overall, Brazil fared best among the Latin American countries (59%) and had the third highest rank of all 37 countries surveyed. Argentina had the lowest percentage in the region (41%).

While fake news ahead of elections is a big issue in Brazil and Mexico, the phenomenon was not widespread in Chile during the country’s 2017 presidential elections and has not been a big topic of discussion among the public, according to Francisco Javier Fernández Medina, author of the report’s Chile overview.

More information not included in the report, as well as methodology information, is available at digitalnewsreport.org. Detailed information regarding each Latin American country is outlined below.

[Ed. note: The Institute reported that its samples in Brazil and Mexico were more representative of urban rather than national populations.]

In the country overview, Eugenia Mitchelstein and Pablo Boczkowski, co-directors of the Center for the Study of Media and Society, noted concentration in Argentina’s private media system – mainly by Grupo Clarín – as well as a distrust of media and politicians, despite high levels of news consumption.

Rodrigo Carro, financial journalist and former Reuters Institute Journalist Fellow, highlighted the strength of Brazil’s commercial broadcasters and the attempts for newspapers to adapt to new business models, including reducing the frequency of publication and establishing online paywalls. He also noted, “Brazilians are some of the most enthusiastic users of social networks and messaging apps in the world.” 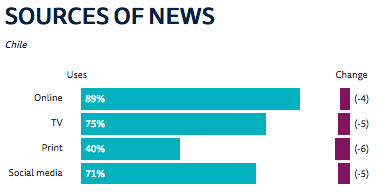 Reuters Institute for the Study of Journalism 2018

Francisco Javier Fernández Medina of the Pontifical Catholic University of Chile emphasized big changes in television, particularly the sale of Canal 13 to Andrónico Luksic, furthering the “commercialization of TV news, bringing Chile closer in line with other Latin American countries.” He also noted that publishers are diversifying by acquiring or creating other media types in order to combat decreasing advertising revenue.

María Elena Gutiérrez Rentería of Universidad Panamericana emphasized the popularity of television in Mexico and the growth of digital native news sources. She also called attention to the dangers of being a journalist in Mexico, which is the deadliest country for journalists in the western hemisphere.