Based on lessons from Brazil and Mexico, Argentina's Reverso unites 130 media outlets in collaborative fact-checking effort

After Mexico and Brazil in 2018, as well as Uruguay and Bolivia in 2019, Argentina also launched a collaborative fact-checking project ahead of 2019 general elections. And with 130 participating media outlets, Argentina’s Reverso stands as the broadest alliance against disinformation ever carried out in the region.

This is an initiative of the renowned Argentine fact-checking site Chequeado in conjunction with AFP Factual, the fact-checking arm of Agence France-Presse; First Draft News, the London-based journalism center; and Pop-Up Newsroom, an international organization that facilitates collaborative journalism.

While Pop-Up Newsroom participated in Verificado 2018, Mexico's award-winning fact-checking project headed by Animal Político and AJ + Español in Mexico, AFP and First Draft are part of Comprova, which brought together 24 media outlets in Brazil against disinformation during elections this past year and has just launched its second phase. The latter are also responsible for Crosscheck, a collaborative fact-checking project carried out during the 2017 French elections. 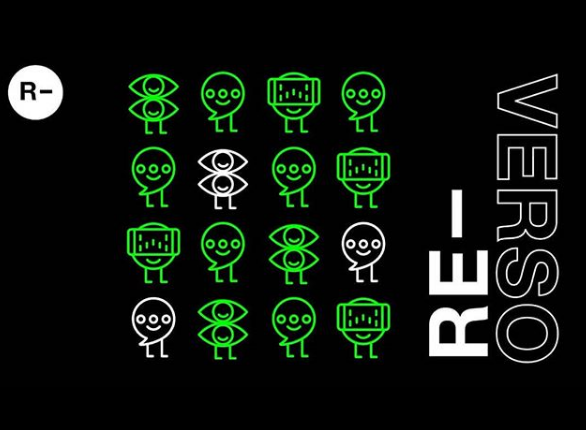 It’s from this expertise, plus the nearly 10 years of Chequeado’s work, that Reverso emerges, said Laura Zommer, the project's editorial director and editor-in-chief of Chequeado, to the Knight Center.

“We did an analysis of how collaborative projects operated in other countries and we believe that each of its allies strengthened some component of the project,” she said.

And while in June, when it published its first check, Reverso counted 80 media outlets in this collaborative effort, two months later there are 130 media outlets that are part of the project, Zommer said. Of these, about 50 are producer allies, meaning they also produce the checks that are published on the site and on Reverso’s networks and by all participants of the initiative.

“We made the alliance because we recognize that just as disinformation goes viral in the electoral period with a lot of polarization like Argentina has, we need to make a strategy that will help us to make the debunking of disinformation go viral,” she said. “Because the studies that exist prove to us that information or disinformation circulates in micro segmented tribes more and more. And reaching those segmented tribes from Chequeado in a short time was much more difficult than being allied with other media that could just co-publish the content simultaneously.”

Reverso's central workplace is in the Chequeado newsroom in Buenos Aires, while allied media are present in Argentina's 24 provinces, according to Zommer. These include local and national media, including daily newspapers, magazines, news sites, television channels and radio stations, which are diverse in “ideological terms and also in terms of format.”

“[Forming the alliances] was a long process that seemed impossible at times. But finally what prevailed in all is that, well, there is a lot of difference between the media outlets in editorial lines and ways of understanding the profession – more or less open, more or less transparent, more or less collaborative – but we can all agree that a lie is a lie and that in the electoral period the process and integrity of the vote must be preserved as much as possible,” she said. 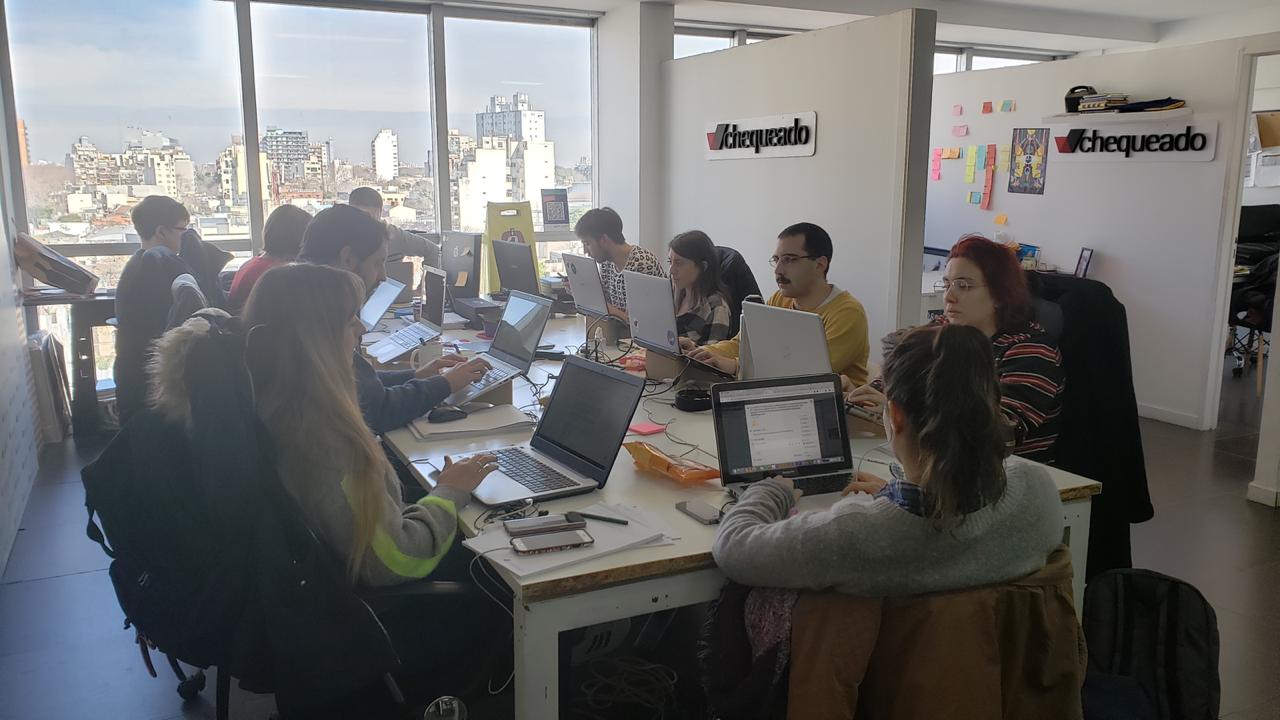 Participating media made three commitments to the initiative: participating in the face-to-face training conducted by Chequeado and First Draft News on disinformation and fact-checking; not editing the content of the checks, but publishing them in full; and if any media publishes something that they later discover to be disinformation, they should update their content and post the correct information to the same URL, if it is a digital outlet.

The training took place in 12 Argentine provinces and 500 journalists participated, Zommer said. In addition to the seven-hour on-site course, the media outlets who were willing to be producer allies had to attend a five-day online course. The idea is “to leave the Argentine media with the ability so that when the project is over, on December 11, when the government that wins the elections assumes power, there could be other media outlets that will continue to debunk disinformation.”

The checks are signed by the professionals or the media outlet that performed them and are edited by both the Chequeado team and the AFP Factual team, as noted in each post on the Reverso website. From the checks, graphic pieces are produced that signal whether the information checked is false (red), misleading (blue) or true (green) so that they can be shared on the same social networks where disinformation is being disseminated. 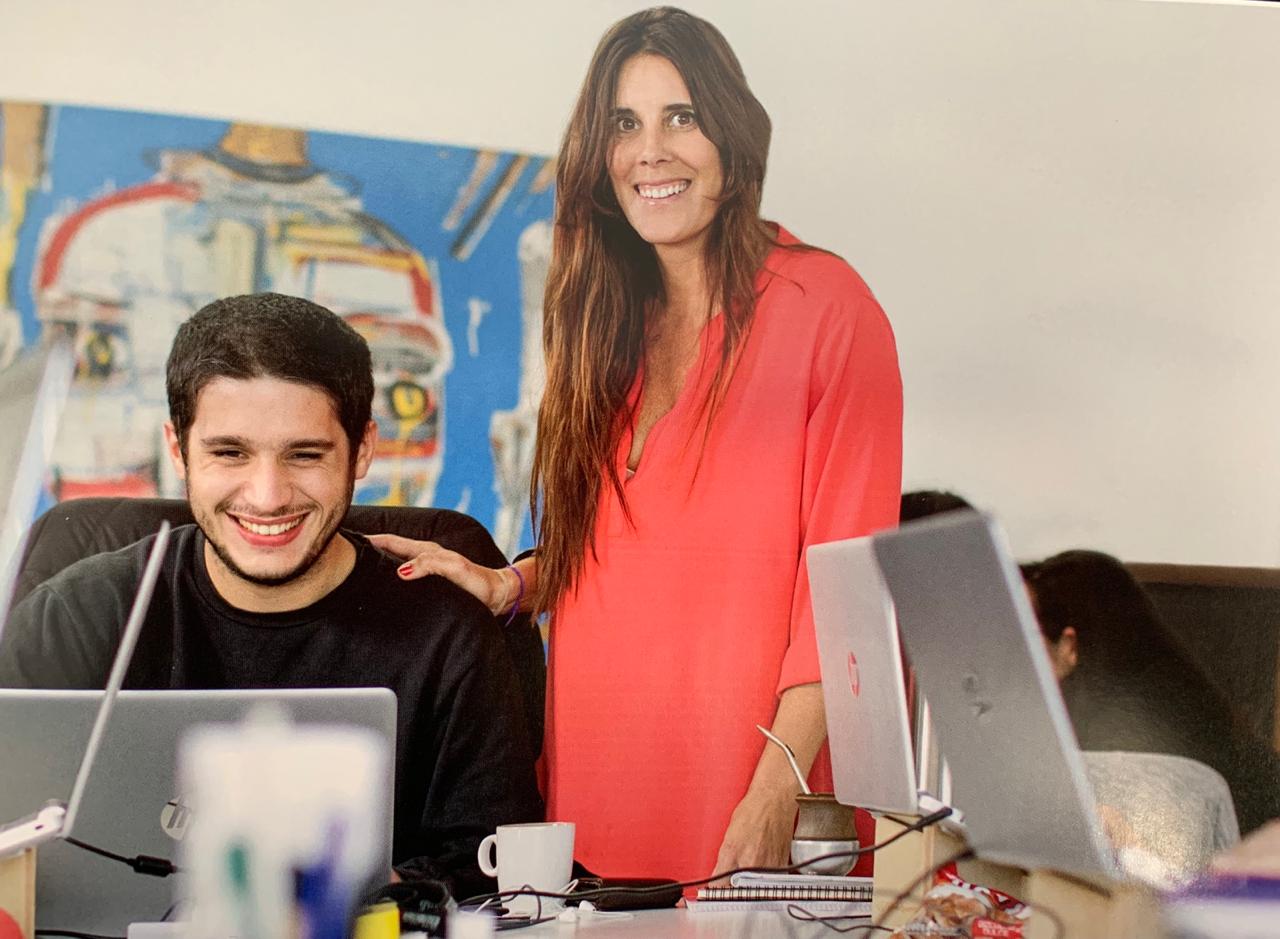 Manuel Tarricone and Laura Zommer in Chequeado's newsroom, from where Reverso is coordinated (Courtesy)

These processes were also structured from the lessons of collaborative projects carried out in other countries, Zommer explained.

“In the case of Comprova, we believe that a component of virality was missing. We believe that Mexico did better, but in the case of Mexico, for example, the issue of leaving behind the training in fact-checking [for participating media] was worse than France,” Zommer said. “Obviously our project also, when we finish the evaluation, will have weaknesses, but what we tried to do was study very closely the lessons of what had gone well and what had not gone so well from the other previous projects and to try to just strengthen those points.”

“Journalism at present is collaborative or it does not exist”

One of the producer allies of Reverso is Clarín, one of the most important newspapers in Argentina. In June 2019, Clarín.com had more than 20 million unique visitors, ranking first among news sites in the country, according to Comscore data.

This place implies “superior responsibility” in combating disinformation, Pablo Javier Blanco, editor-in-chief of Clarín's Digital Desk, told the Knight Center. "It seems to me that we had to be [in Reverso], that as the largest media outlet in the country we can't look the other way while these things happen."

Still, there were doubts within the newspaper about the collaboration. “We were one of the last media outlets to join, because being a large media outlet there were also some doubts, especially what was going to be checked,” he said. “Finally, after a little insistence, it was approved that we were part of Reverso and from that we started the training and did the online course, which is quite rigorous.”

Blanco said that from his point of view, it was important for Clarín to participate in the initiative. “Disinformation is one of the great evils that social networks generate today and we, as a prestigious media outlet that consults people every time they feel disoriented there, we had to be part of the collective. In addition, it also serves as its own learning, so that Clarín journalists themselves are even more attentive when it comes to collating information they receive through social networks,” he said.

One of the checks with which Clarín collaborated and that reverberated on social networks and in media across the country showed that a video that went viral in early July with a speech by Argentine Minister of Security Patricia Bullrich had been manipulated to imply that she was on drugs.

The minister publicly thanked Reverso for its check. “I am very grateful and I think the publication from the Reverso project is great, because all the media began to respond – including a lot of media from the interior –to say that this video was false, that it was a hoax."

For Laura Zommer, the scope that Reverso has already registered in these two months of operation, with about 60 checks carried out and 1,000 republications and the repercussion among Argentine public figures, is proof of the effectiveness of the collaboration in combating disinformation.

“It is seen that journalism at present is collaborative or it doesn’t exist. Continuing to work with the old logic of the competition I think is crazy, thinking about the way in which people consume content,” she observed. “What this type of project shows is that clear rules, common principles can be made, where everyone wins and collaborates.”