In recent years, freedom of expression and freedom of the press have come under attack by State forces and criminal groups in several Central American countries. Faced with the recent escalation of these attacks in Costa Rica, El Salvador, Guatemala, Honduras, and Nicaragua, press professionals from these countries have come together to create the Red Centroamericana de Periodistas [Central American Network of Journalists], a collective response to this scenario of threats to journalists and independent news outlets critical of their respective governments.

The Network was officially presented to the public on Nov. 3 in the city of Antigua, Guatemala, during the 12th Central American Journalism Forum, [Forocap, by its Spanish acronym], organized by the Salvadoran digital investigative news outlet El Faro. Carlos Dada, co-founder and director of El Faro, is also one of the founders of the Network, as another co-founder, Guatemalan journalist Marielos Monzón, told LatAm Journalism Review (LJR).

According to Monzón, in addition to her and Dada, the founding members are Angélica Cárcamo and César Castro Fagoaga from El Salvador; Carlos Fernando Chamorro and Wilfredo Miranda from Nicaragua; Claudia Méndez Arriaza and Quimy de León from Guatemala; Jennifer Ávila and Telma Mejía from Honduras; and Giannina Segnini from Costa Rica.

The initiative began to gestate in November 2021 due to the shared concern of this group of journalists with "the downturn of the democratic situation in our countries and the increasingly strong and sustained attacks against freedom of the press, against freedom of expression, to the detriment of the right of the population to be informed," Monzón said.

“We decided that it was important to create an initiative, a space that would allow us to face these attacks and harassment against the independent press jointly. Just as we are being attacked in the five countries and there is an alliance against the press, from corrupt powers, governments, economic, political and military sectors and criminal networks that have joined forces to attack independent journalism, so we independent journalists should unite and face this state of emergency that is happening to us.” 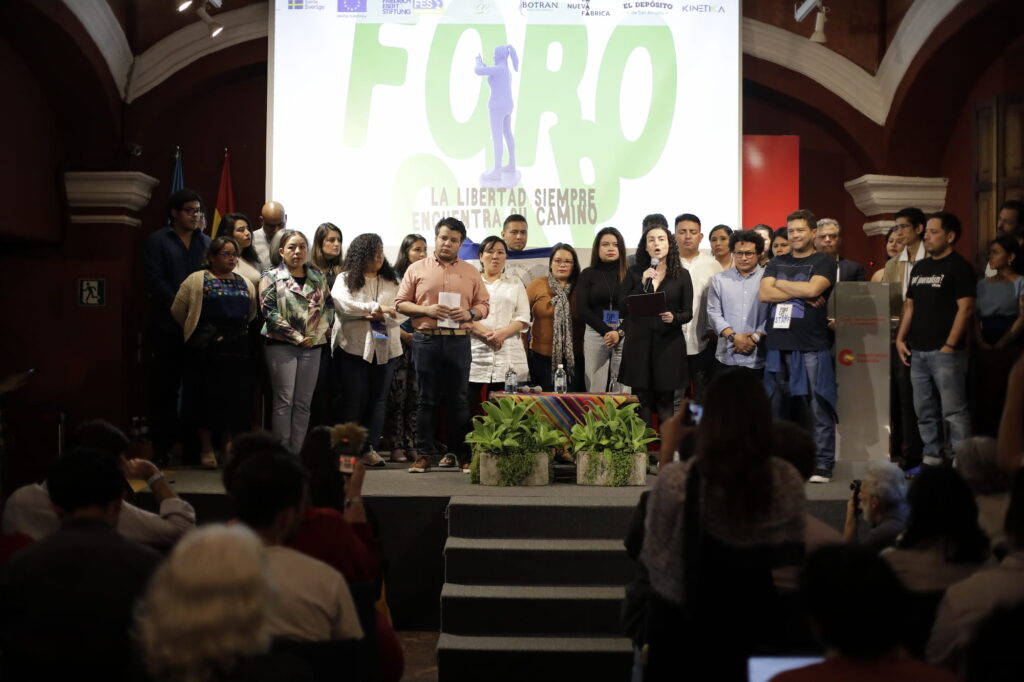 The Central American Network of Journalists was launched at Forocap, in Antigua, Guatemala, on Nov.4, 2022. Photo: Jorge Cabrera / Contracorriente

At the launch of the initiative at Forocap, Monzón and Wilfredo Miranda read the Network's manifesto, accompanied by some of the co-founders and journalists who have joined the group in the last year.

“In view of the emergency that we as journalists are going through, facing the threat of regimes that seek to silence us, and with the conviction that journalism critical of power is essential for democratic life and for the construction of more egalitarian societies, we are creating today the Central American Network of Journalists as a plural space of articulation, public expression and defense of independent journalism.”

Support in Exile and Legal Defense

In the home countries of the Network's founders, press freedom is under threat in various ways, with Nicaragua being the most serious case. Since 2018, the government of Daniel Ortega has been arresting journalists and shutting down independent news outlets critical of his administration. Entire newsrooms are in exile, and the country has become "a huge prison," as Nicaraguan journalists reported to LJR in June.

El Salvador and Guatemala have also experienced a government siege of the press. Presidents Nayib Bukele and Alejandro Giammattei, respectively, have invested against independent journalism through surveillance, legislative measures aimed at censorship, and judicial persecution. Costa Rica, which until recently was considered a country in "good standing" regarding press freedom, has seen President Rodrigo Chaves repeat stigmatizing speeches against journalists and take steps to intimidate media critical of his government. In Honduras, the press "has experienced a slow descent into hell for more than a decade," according to Reporters Without Borders (RSF), and the country continues to be one of the most lethal for journalists in the Americas.

Given this context, more than a hundred Central American journalists have fled their countries in recent years because of threats to their lives and freedom. Therefore, among the work fronts of the Central American Network of Journalists, according to Monzón, is to structure a safe evacuation system, so that professionals who are in imminent risk of death or imprisonment motivated by their work have safe ways to leave their countries.

In this regard, the Network will also work to establish a shelter system for journalists who have to go into exile. This includes providing housing and temporary funds for their upkeep, as well as psychological attention to deal with trauma of violence suffered and self-exile. It will also seek to structure local integration networks, such as newsrooms in the places of destination where journalists can be welcomed and continue working.

Another front of the Network's action will be the legal defense of journalists who are targets of legal persecution.

"Unfortunately, the most recurrent actions of the new Central American authoritarianisms include legal accusations against journalists, which are unfounded, but which imply recurrent expenses that are normally unaffordable for practicing journalists. We would like as a network to support legal defense by identifying support organizations for this specific threat. For example, it could be with pro bono defense, a channeling of funds, or also a way to establish a defense firm specializing in freedom of expression," Monzón said.

The Network will also engage in public opinion and advocacy, with campaigns, press releases, and reports on the state of press freedom in the region. The goal in this case is “that the people of the Central American countries understand that attacking journalists is to deny society its right to be informed. We are not defending the exercise of journalism in the abstract. We are defending the right of the people, of societies, to have clear and transparent information about events that impact them,” the journalist said.

However, according to Monzón, the most important thing at the moment is to consolidate the network and gather support, including financial support, to carry these plans forward.

"It is true, we are being harassed. We are being persecuted. They want to silence us. But we want to make it very clear that we are convinced that the exercise of a journalism that is critical of power is essential for democracy to exist. We are not willing to be silent and we are going to act jointly and promoting these actions for the defense of democracy and the defense of the citizens’ right to be informed," she said.