Between January and June of 2020, there were 630 aggressions against the press in Latin America, according to Voces del Sur, a press freedom initiative in the region. These increased or worsened after governments issued a health emergency for COVID-19.

The regional project published its first joint report about the number of aggressions and the attacks against Latin American journalists that each organization monitored locally. 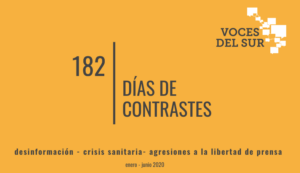 Of the 630 registered aggressions, the report pointed out that 225 were mainly physical attacks. Likewise, there were 126 cases of stigmatizing speech, 77 cases of internet restrictions, 75 cases of difficulty accessing information, 43 cases of arbitrary detentions, and 33 cases of abusive use of state power against journalists and outlets.

The report also documented 32 judicial processes against outlets and press professionals, eight interventions in the legal framework that went against international standards of freedom of expression and access to information, six kidnappings, three cases of torture, one murder and one forced disappearance.

The principal aggressor was the State, the report pointed out, having been responsible for 453 cases against journalists and outlets in the countries the report monitored.

The report also made a map of the laws that were utilized to penalize disinformation during the pandemic. For example, the report indicated that in Bolivia the interim government has tried up to four times to pass decrees to sanction outlets that publish what they might consider as disinformation. However, nongovernmental organizations’ pushback has shut down those initiatives, the report indicated.

The pandemic spurred new challenges for journalism in Latin America, according to the report. 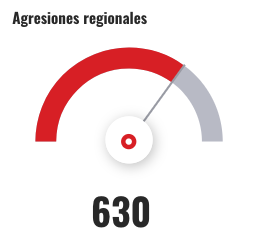 Number of aggressions against journalists of Voces del Sur report 2020

In Ecuador, the state of emergency meant many journalists lacked the necessary protections to cover the pandemic. According to the report, Ecuador was one of the first countries to report the death of a journalist due to their work.

In Guatemala, there were arbitrary detentions by police against journalists. Meanwhile, in Peru, journalists were threatened via WhatsApp and Facebook by local public officials after reporting revealed corruption in the management related to the pandemic.

In Brazil, which has had the Access to Information Law since 2011, president Jair Bolsonaro issued this March a measure to suspend responses to open records requests, thus establishing arbitrary limitations. The measure was later annulled by the Supreme Tribunal.

In Nicaragua, aggressions and threats against the press continue with the same intensity since the social protests unleashed against Daniel Ortega´s regime in April of 2018.

Cuban journalists continued to be threatened with Law Decree 370. With this decree, any opinion or information on social networks can be directly sanctioned with a fine, without trial.

Between January and June alone, 30 people were interrogated and fined, according to the report. The decree imposes a fine equivalent to $120 USD and, if not paid, a person could be imprisoned for six months in retaliation.

Uruguay approved in early July the Law of Urgent Consideration, which includes articles that weaken the right to protest, freedom of expression and access to public information, the report stated.